Barbara Nimri Aziz is an American anthropologist, journalist and writer. She is known for her research and scholarship in the areas of Tibetan and Himalayan Studies. Aziz played a leading role in the Arab-American literary sphere and was involved in establishing the literary collective RAWI.

In 1980, Aziz uncovered the life of prominent Nepali women’s activist and ascetic Yogmaya Neupane. Revelations from her decade of research led to the publication of her book, Heir to a Silent Song: Two Rebel Women of Nepal (2001), the first contemporary documentation of the subject.

After graduating from Queen’s University, Canada, Aziz seemed destined for a long career abroad. She traveled from England after a road expedition directly across Europe, Middle East, Iran, Afghanistan and Pakistan, arriving in India in 1962.

She spent her first winter there in a Tibetan nunnery in Himachal Pradesh, then joined a Save the Children home for Tibetan children in Simla as its headmistress for 3 years.

By 1968, she realized her true calling and was accepted to a PhD program at the School of Oriental and African Studies (SOAS) in London. Her doctoral research took her back to Nepal and Tibetan settlements there, a pursuit that has never ended.

Aziz’s six books reflect a lifetime of travel and research across several continents. Today, she resides in the middle hills of New York State where winter recalls the thin air of Solukhumbu and summer the mist rising above the Arun River in Nepal. 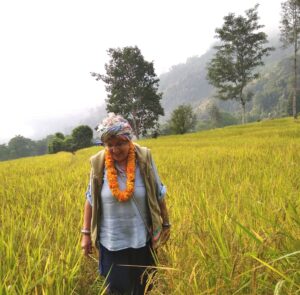 After the publication of Neelam Niharika’s award-winning novel Yogmaya in 2018, interest in the early 20th C. Yogi surged and with it, my reports going back to 1980 became especially relevant. This demanded updates and a focus on Durga Devi, Yogmaya’s compatriot. Revisiting the Arun River Valley in 2019 was the last step in preparing Yogmaya and Durga Devi, Rebel Women of Nepal for release in 2020. 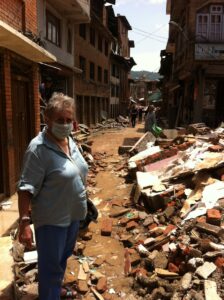 Heading to Nepal on April 25 for ongoing work, I was airborne when the earthquake struck Kathmandu Valley and nearby villages. Like many sympathizers I became swept up in collecting funds for needy families at Amrit School, and to assist the nunnery in Solu damaged when the second upheaval struck on May 15th [see photos here] 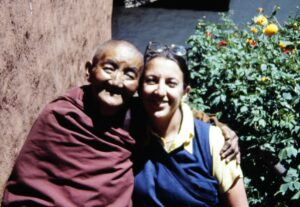 Nepal beckoned me with a demand for new editions of Tibetan Frontier Families and Soundings in Tibetan Civilization. In the intervening years, my 2001 book Heir to A Silent Song highlighting the revolutionary Yogmaya, was receiving wide public attention. I revisited the Arun Valley and learned about major political developments in the newly won democratic Republic of Nepal.

Teenage monks and nuns photographed in 1975 at Solu-Khumbu’s Thupten Choeling Monastery were now seniors while elders had passed on. With the loss of the revered abbot, Trulshik Rinpoche in 2011, the community entered a new tenuous phase. 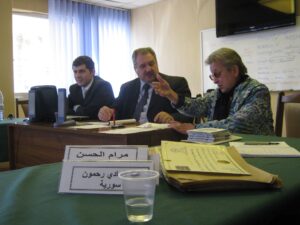 Teaching in an exchange program that brought college-aged Syrians and Americans together, I was invited to work with Syrian professionals at the Arab Institute for Media and Broadcasting in Damascus. My courses produced two handbooks, one in Arabic in 2011 – Short Features for Radio: A Manual for Broadcast Journalists. War again, forced me to relocate. 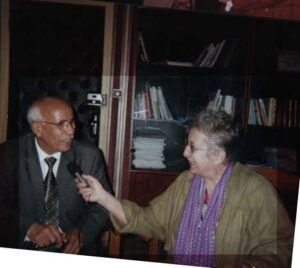 Eschewing the role of war correspondent after the 2003 US invasion of Iraq, I moved to an almost forgotten corner of the globe. Algeria was a part of Africa unknown to me at the far western reach of Arab civilization.

A Fulbright Research appointment there allowed me to work closely with Algerians and travel widely across Africa’s second largest nation, including excursions into the Sahara desert around El-Oued.

Oct
1995 | RAWI: Establishing and fostering a network of Arab-American Writers 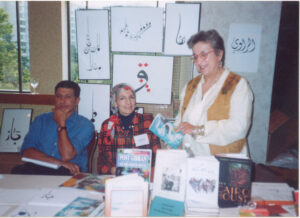 The Arab writers and other artists Barbara had interviewed in her travels and assignments in Egypt, Syria, Iraq, Palestine, and Lebanon, joined Arab American authors on her NY radio airwaves. As literature became a platform for the assembly of talented compassionate Arab voices, it led to the founding of Radius of Arab American Writers Inc. (RAWI). As its director, Barbara worked with the president, poet and painter Etel Adnan, convening conferences and supporting emerging talent. 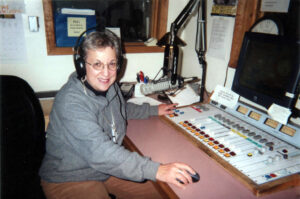 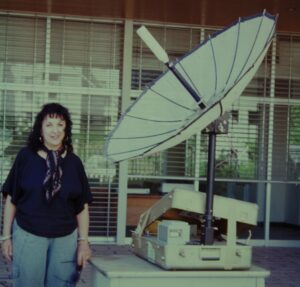 Barbara’s assignments to Syria, Palestine, Iraq, Egypt, Kuwait were circumscribed by a new series of wars, beginning with the Persian Gulf War. That began a traumatic career devoted to exposing a brutal embargo on Iraq to an unreceptive public. Eventually, Barbara’s reports from Baghdad during the embargo led to Swimming Up The Tigris, published in 2007 only after the US taste for war subsided. This 1991 photo was taken at the Baghdad Press Center when satellites were newly available. 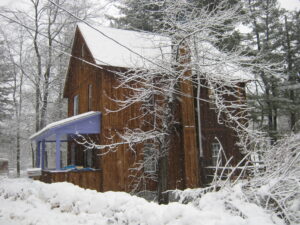 Barbara’s move to Upstate New York coincided with a shift from academia and anthropology. Rebuilding an old house in a riverside abode evocative of eastern Nepal provided her with a base to pursue journalism. Inspired by Nepal’s rebel women with political sagacity for honest journalism, her interviewing and writing skills merged in radio and print.
Barbara’s political growth and personal reevaluations led to a return to her Arab homelands. Assignments in Syria, Iraq, Palestine, Egypt and Kuwait offered a new period of discovery. 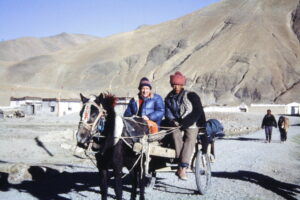 Although it interfered with ongoing work in the Arun River Valley, Barbara took the opportunity to go to Tibet and met with Chinese Tibetologists in Beijing and Szechwan. She spent most of her time in Dingri in southwest Tibet, a dry, sparsely populated stretch of the Tibetan plateau facing Mt. Everest which was known to her abstractly through her work 15 years earlier. She moved from village to village, passing farms and pastures, circumambulating the holy Tsibri mountain, collecting plants, speaking to farmers roasting barley and herders collecting fuel, speaking to nuns in isolated hermitages. Research from these excursions led to a new edition of Tibetan Frontier Families in 2011. 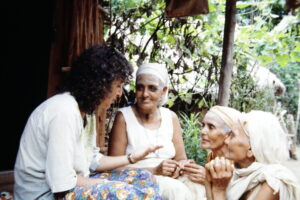 The diversity of Nepali life beckoned Barbara to its jungly eastern flanks, starting in Limbu farms in Therathum in 1978 see. She traveled widely following pilgrims to Nepal’s mountainous holy sites, ending with her arrival in the legendary Arun River Valley. Barbara uncovered the life of prominent Nepali women’s activist and remarkable rebel women. Yogmaya Neupane and Durga Devi. Revelations from her decade of research led to the publication of he book, Heir to a Silent Song (2001), the first contemporary documentation of the subject and later Yogamaya and Durga Devi, Revel Women of Nepal (2020). 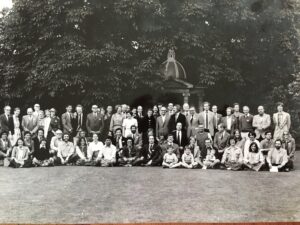 From the 18th century interpretations of Buddhism and Buddhist society was dominated by Europeans who, when they turned their attention to Tibet interpreted it largely through the lens of theology and religious leadership. This continued through the late 20th century. When anthropologists entered the field, a fresh and revealing picture of Tibetan culture emerged. Barbara Nimri was among the first foreign scholars whose careful research and fluency in Tibetan could challenge the dominance of textual scholars. Her first contributions were offered in 1980 at The Seminar in Tibetan Studies at Oxford University, UK hosted by Michael Aris and his wife Aung San Suu Kyi. In 1982, she was asked to convene the followup seminar at Columbia University, New York. (See Soundings in Tibetan Civilization, papers presented at that conference, co-edited by BN Aziz and M. Kapstein.) Her work marked the entry of a new generation trained in sociology and with a command of colloquial Tibetan.
This 1980 photo of Oxford University conference of Tibetology includes eminent scholars David Snellgrove, Sandy McDonald, Géza Uray, Helga Uebach, Samten Karmay, Heather Stoddard, Per Kværne, Nick Allen, Anne Marie Blondeau, Jampa Panglung and Turrell V. Wylie 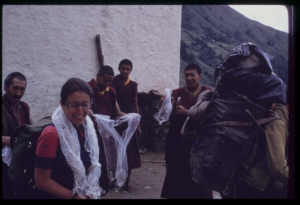 Barbara returned to Nepal for further research in Tibetan religious history, namely the life and teaching of Pha Dampa Sangyas, the 12th century Black Yogi whose center was Dingri Langkor. Aided by nuns and monks at Trulshig Rinpoche’s Thupten Choeling Gonpa in Solu, she photographed a precious manuscript. Overseen by E Gene Smith, it was published in 1979 in Thimphu, Bhutan. (See the book  The Traditions of  Pha Dampa Sangyas: A Treasurd Collection of His Teachings. Five volume Tibetan text; manuscript photographed and introduced by BN Aziz) 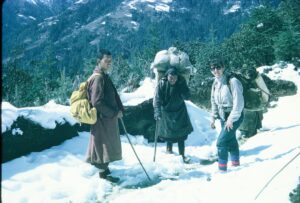 After completing her M. Phil in London, Barbara launched a 13 month PhD field expedition in Nepal. She traveled into the hills by foot and settled in Solu-Khumbu, moving between Thupten Choeling monastery and Chelsa, a settlement of Tibetan refugees from Dingri. While preparing her doctoral thesis in 1973, the anthropology department at SOAS hosted the first International Conference on Himalayan Studies,
Photo: — R to L, Nepal geographer Harka Gurung, conference chair Prof. Furer-Haimndorf, anthropologist Patricia Caplan, and Paris-based historian Sandy MacDonald.
Tibetan Frontier Families, 1978, was revised in 2011 with new material after her research visits to Tibet between 1985-1987. 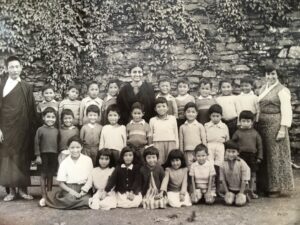 Unlike most young women in Canada at the time who pursued teaching or nursing, Barbara was drawn to an uncharted path and destined for a unique career.

A year after graduating from college, she arrived in India overland via England. She was hired by Save the Children to set up a home for toddlers of Tibetan refugees who had fled the Chinese occupation of Tibet in Shimla, Northern India. The home, called Sterling Castle, was housed in a huge old house used by British officers. By 1967, when Sterling Castle’s children were transferred to a middle school or were reunited with their parents, she started looking into studying anthropology at the University of London’s School of Oriental and African Studies (SOAS). 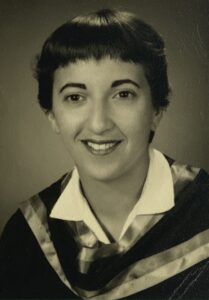 Aziz was born in Ontario, Canada, to Arab immigrants who had arrived in the country in the early 20th century. The family moved to Toronto, where she attended highschool with other working class children and merged into the wider immigrant population residing in the city. She was one of two students in her high school and the third in her extended family to attend college.

A century ago Yogmaya and Durga Devi, two women champions of justice, emerged from a remote corner of rural Nepal to offer solutions to their nation’s social and political ills. Then they were forgotten.
Years after their demise, in 1980 veteran anthropologist Barbara Nimri Aziz first uncovered their suppressed histories in her comprehensive and accessible biographies. Revelations from her decade of research led to the resurrection of these women and their entry into contemporary Nepali consciousness.
This book captures the daring political campaigns of these rebel women… read more